Every September 22nd, people from around the world get together in the streets, intersections, and neighborhood blocks to remind the world that we don't have to accept our car-dominated society. Amman city suffers from Urban Sprawl and the domination of cars, our lifes became car dominated and we rarely enjoy nature and the environment. Shouldn't we become part of this global day?

"World Carfree Day is the perfect time to take the heat off the planet and putit on politicians and planners to give priority to cycling, walking and publictransport," says Randall Ghent, initiator of the first World Carfree Day in 2000. The global day of action now takes place annually on September22. On September 22, 2007, World Carfree Network and its member organizations around the world call for permanent changes to make cities more environmentally and socially sustainable 365 days a year. In more than 1,500 cities and 40countries, liked-minded active citizens around the world will call for measuresthat actively reduce car use, with carfree street festivals, bicycle parades,street closures and other special events.For individuals, the network and its supporters will distribute a condensed one-month version of its Autoholics Anonymous 12-step programme, to give people the support they need to kick the car habit.For municipalities, the network and its supporters will encourage implemention of the infrastructural and policy changes necessary to reduce our society’s car dependence and increase our quality of life. As a separate project related to World Carfree Day, the network has put out a call for submissions for its 2nd Annual Street Conversion Design Contest (www.worldcarfree.net/contest/), challenging people to come up with cutting-edge designs to transform existing areas to create lively people-oriented spaces free of traffic. They are encouraged to implement the designs on the ground on September 22. 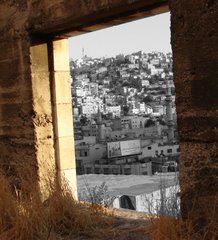 Amman is a city best enjoyed on foot, yet we plan our streets for cars. Amman City's streets are the soul of its neighborhoods and the pathways to it’s destinations. For generations, Jordanians and visitors have strolled, shopped and socialized on sidewalks and street corners. Pedestrian friendly streets are the city's most fundamental assets.
Unfortunately, we aren't making the most of these assets. Instead, our streets are being managed almost entirely for
traffic flow, with neighborhoods and business districts buckling under increasing amounts of dangerous car and truck traffic. If we continue planning our streets for cars and traffic, we will get more cars and traffic; conversely, if we start planning our cities for people and places, we will get more people and places. Streets are more than just car corridors; they are valuable civic spaces and resources that need to be wisely allocated. We need to start thinking about a campaign building the movement to re-imagine our streets as lively public places.

The Benefits of Great Streets 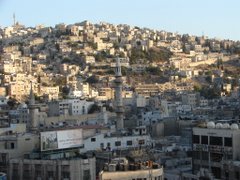